Selected work
A selection of posters, logos, brand designs and various print and interactive works from 2001 to date. For older examples of my work, feel free to browse the archive.
Posters (1 of 44)
back
next 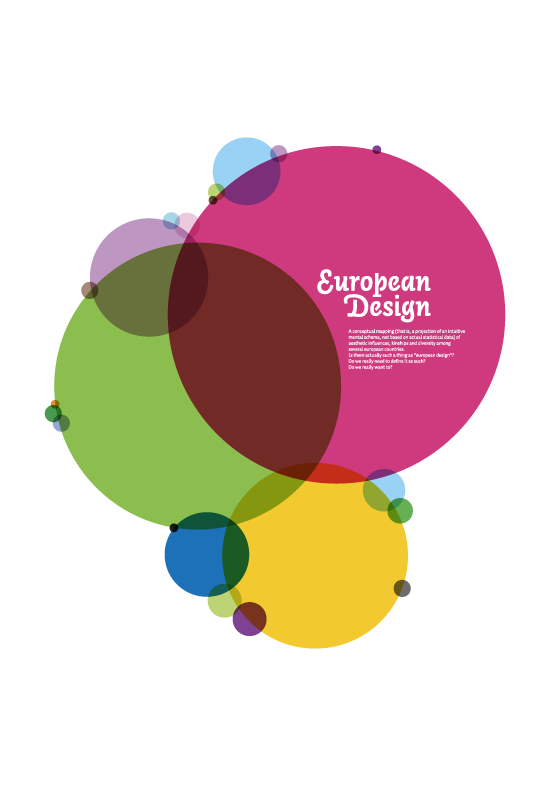 mapping (europe)
1. Is there actually such a thing as "european design" or merely an assembly of diverse frameworks and approaches (eg. Polish, French, German or Swiss)?

3. Assuming that we follow the holistic approach of "european design", what are the aesthetic interrelations, influences and interactions between the former and well established, non-European approaches, such as those of North American, Japanese and Iranian design? What are their differences? Are there any differences? Do we wish for them to exist (or disappear all the same)?

The abstract, conceptual schema on the first poster is an attempt to visualize the above (inevitably subjective) thoughts and give an incomplete answer to the first of the questions. Each circle represents a European country. The size of each circle is proportionate to the number of designers from each corresponding country, as it was documented in the catalog of the Golden Bee, International Biennale of Graphic Design το 2004. The selection of the Golden Bee biennale as an arbitrary reference point offered a rather simplified estimation of the current status quo in the graphic design domain (one that I trust to be very close to reality). The largest circles correspond to: Russia, Poland, Germany, France, and Switzerland (countries with a prevalent design tradition in Europe), while the space and the overlapping between the circles, maps the aesthetic influences, kinships and diversity among the corresponding countries. The resulting schema is a unity (the notion of "european design" maybe?) and a cluster of detached and autonomous entities all at once.

The second poster, as an extension of the first one, places this mental schema among the most well established non-European approaches - that of North America, Japan and Iran - in an attempt to answer the first part of the third question.

The second question and the rest of the third question remain unanswered.